It's Dangerous To Go Alone — Take This is a spur of the moment RPG where one person (GM) goes through the contents of their bag and gives them one thing from their bag to a player to take with them on an adventure into the unknown? The GM plays as a towns-person who "wakes" the player(s) having found them washed up along the shore of their town. Upon discovering the player(s) have no memory of how they came to be there the towns-person takes them home. Along the way the player discovers there is trouble afoot in the realm they have found themselves in. Unable to not answer the call for help they volunteer to help, however they don't have any equipment of their own. But they're in luck the towns-person has a (...) and is more than happy to lend it to the player in exchange for their assistance. And off the player goes on their adventure.

Game Contents: One ruleset on a B5 sized piece of paper

Number of Players: Two to Three

Player and GM collectively improv out scenes where the player is given a task to accomplish to help out the local townspeople with a problem. When their task is complete they get loot as their reward. Constraints being the GM can only give things they have in their bag to the player and they can not have prepacked for this adventure as they (GM) weren't expecting visitors.

What is a Micro TTRPG?

A short and sweet game meant to be played with little prep.

In order to download this game you must purchase it at or above the minimum price of $6 USD. You will get access to the following files:

This game assumes some knowledge of improv, but the story prompt has universal appeal.  Really pleasant recall back to the early days of the Famicom, and using genre tropes that are still enjoyable today.

Now, every time I reach for what is in my bag, there is another reason to smile and think of potential adventures.

It's Dangerous To Go Alone is a cool one page rpg framework about spontaneously handing out stuff you have.

Basically, you dig into your bag, pull something out, hand it over, and then that's the mythical object your player has to use to solve their adventuring problems with.

I wouldn't say Dangerous is an intro game, since part of its instructions are kind of just "play through an rpg" and it doesn't really go over what that entails. However, it potentially combos really well with other short rpg systems, and if the GM just brings a bag of random objects, it makes for a neat prompt generator too.

I'd recommend this to anyone who wants to freestyle a legend of zelda sort of game, or who wants to add some novel mechanics to their favorite system. 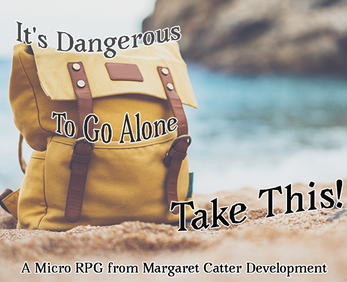