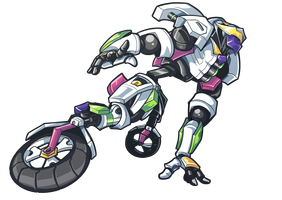 Hello and welcome to my upcoming game where you play magical girls sent on a mission to another world to defeat an invasive enemy.  Played over discord Magical Girls and Mecha is what I would term a digital LARP.  Please look forward to more updates about the game and I hope to see it released by the end of the year if not early next year.

At least five players, one GM and potentially one or more moderators

You and a group of other recently minted magical girls who have the ability to pilot mecha robots have been tasked with crossing a doorway to The-Before to stem the flow of enemies who have begun invading your homeworld for unknown reasons.

In the year 20XX across the globe doors began to show up. From every door came devices that disappeared when they crossed the threshold followed soon after by what would become known as The-Once-From-Before. The-Once-From-Before soon began to wreak havoc everywhere they appeared. Country after country tried to fight them to varying degrees of success but it became obvious that it was a slow and deadly battle.

After tracking the devices that came from the door down the governments in charge found that the devices attached themselves to various middle school and high school-aged girls and gave them the ability to call forth from a pocket dimension a mecha suit. These mecha suits were only able to be used by their respective owners and were best used for fighting the The-Once-From-Before.

After nearly 5  years of fighting both agencies come up with a plan to go through a door and return, something that had never been done before. Once through the door, they would find the source of The-Once-From-Before and defeat them.

A group of girls from both agencies are pulled to make the trip.

You are a middle school or high school-aged girl who has been gifted by an otherworldly being the ability to summon mecha suit to fight The-Once-From-Before who are invading your homeworld. However, as they say, with great power comes great responsibility. As the fight against the The-Once-From-Before becomes dire you form a team up with other magical girls around the world to come up with a solution by going to The-Before.

Voice of a Distant Star

A thank you to @kazumiochin & @curewiki for putting this idea on my timeline so it could infest my brain.

This work is
licensed under a Creative Commons Attribution-ShareAlike 4.0 International License.

A game about magical girls and giant robots